iProfit HFT is powered by a simple-self contained Neural Network module which predicts the High/Low values of the next H1 bar.

iProfit HTF trades all the pairs identically. There are no external optimization or parameter changes involved at any stage.

The system has a success rate of 60% with average gains of +17 pip and average loss of -20 pips. iProfit aims to bring small gains to achieve monthly gains consistently.

Max drawdown seen in backtests is less than 20% (<600 pips) in backtests and live trading over the past five years. iProfit trades highly uncorrelated pairs which enables it to minimize risk of drawdown.

Server side Stoploss and Target Price of 120 pips are used, however most trades are closed using an advanced trade management strategy. Only one trade per pair is allowed to be open at any point of time..

All iProfit trades are closed on Friday around US Close to prevent trades carry over into the weekend. Since iProfit is based on very short duration analysis, trades are not carried over the weekend.

iProfit HFT is a trading system designed to profit from most market conditions. The startegy has been designed and followed by a professional day trader. PhiBase Technologies has implemented this strategy as a fast learning neural network since it involves dynamic adaptation to the most price movements seen within the previous 4 to 48 hours. The strategy also involves decision making based on prior data which is considered by many as an art rather an exact science.

iProfit NN model does not contain hard set rules, indicators or hard set formulas. The EA attempts to trade the normal price movements seen within a H1 bar - The NN model only predicts the upper/lower price for the new H1 bar. Prediction is based on a recursive training algo which has a reasonably good accuracy of +/- 5 pips over 65%. While this is an important part of the strategy, the core would be the decision making model which mimics the mind of the day trader. While the High/Low is made available for each bar, the buy/sell/ignore decision is based on price action and probability of success. multiple moving average cross over, support/resistance and stochastics are used to present the current market situation. The moving averages period is dynamically adjusted between 4 to 20 to meet the strategy requirement. The strategy is flow charted in the following diagram for better understanding of entry/exit. 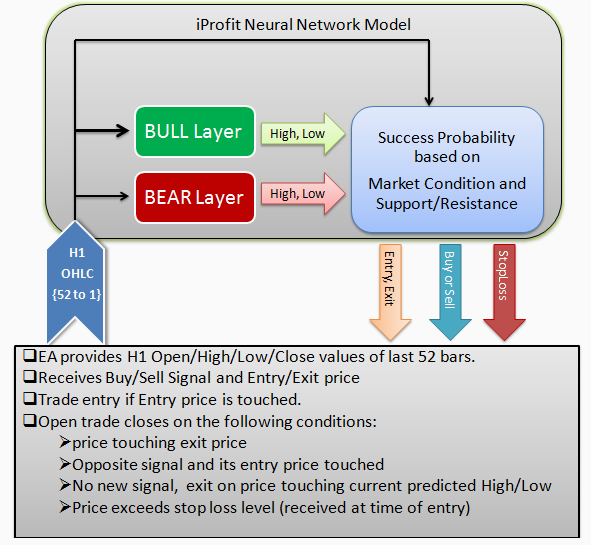 iProfit is an ultra short term strategy, but trades on H1 time frame (every tick). This need not be classified as a scalper. The system has a success rate of 60% average gain size : 17 pip and average loss size is 21 pips. iProfit strategy is not to out smart the markets. The EA trading style keeps generating small gains while keeping losses low - the trading volume gradually add up to net profits. iProfit aims to bring in monthly gains consistently, however there have been losing month (s) in the past and must be expected in future also.

A chart with typical trades is presented below. The EA HUD (chart messages) will indicate the current price action status from the EA's point of view. Advance trade entry notification will be displayed along with entry price when Bullish/Bearish conditions are present. Entry price is made spread independent by the trigger price being calculated as average of Ask and Bid. This reduces trade differences between accounts with different spreads. However, trade trigger will only happen if the price touches/crosses the entry/exit price. Broker feed difference of about 1 pip would be common and this may lead to entry time difference/no entry in some cases. iProfit is a frequent trader and averages about 100 trades. Trade differences between account (if any) would be smoothened out with in a short period of time.

iPRofit strategy is very robust and can be used to trade multiple currency pairs. The EA is recommended for trading on EURUSD, AUDUSD, XAUUSD, EURJPY and GBPUSD. 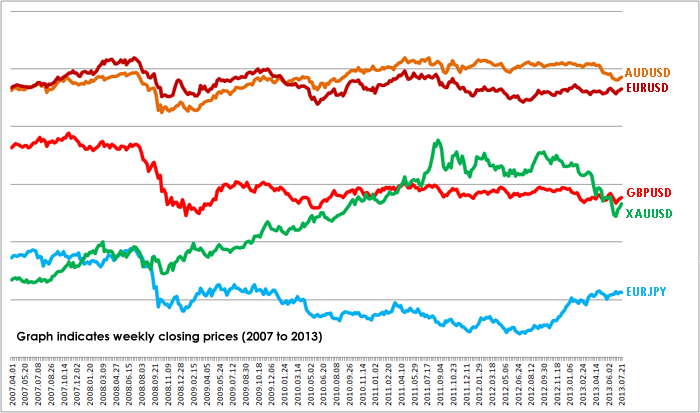 iProfit HTF trades when bullish/bearish trends are present. Ranging/indecisive price action is considered as unsuitable trading condition. Multiple currency pairs provide the EA with good number of trading opportunity. The Low/Medium/Negative correlated pairs also help in reducing the drawdown of the portfolio at any given time. The following chart shows H1 price action for the five traded pairs and EA's trades on each chart during same time period.

When testing iProfit HFT it is very important to use the highest possible data and test quality available. Using standard MT4 M1 test with MetaQuotes data will result in unreliable results. The EA operates on every tick. Mt4 M1 test interpolates between the M1 bar's OHLC to mimic ticks. There are only 4 ticks per minute in a MT4 M1 test. Interpolation is done without correct direction or order in which High/Low was reached within the M1 bar. This makes it highly unsuitable for testing with iProfit HFT. While in most cases trades may match with real live or tick data test, major differences would be seen in phases where H1 ranges are very low. We strongly recommend conducting all backtest at 99% accuracy and with highest quality data available. All tests presented for iProfit have been conducted on DukasCopy Tick Data at 99% modeling accuracy. 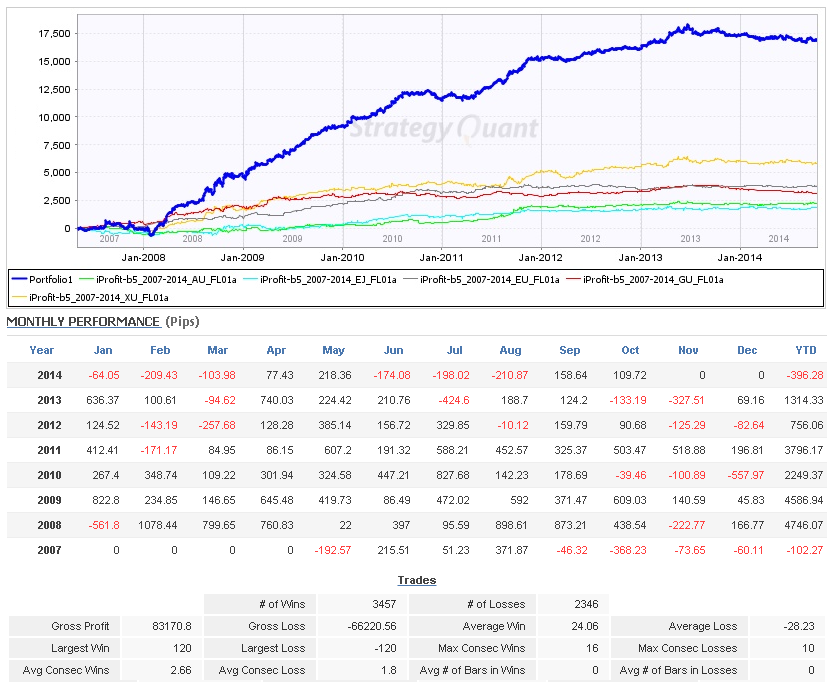