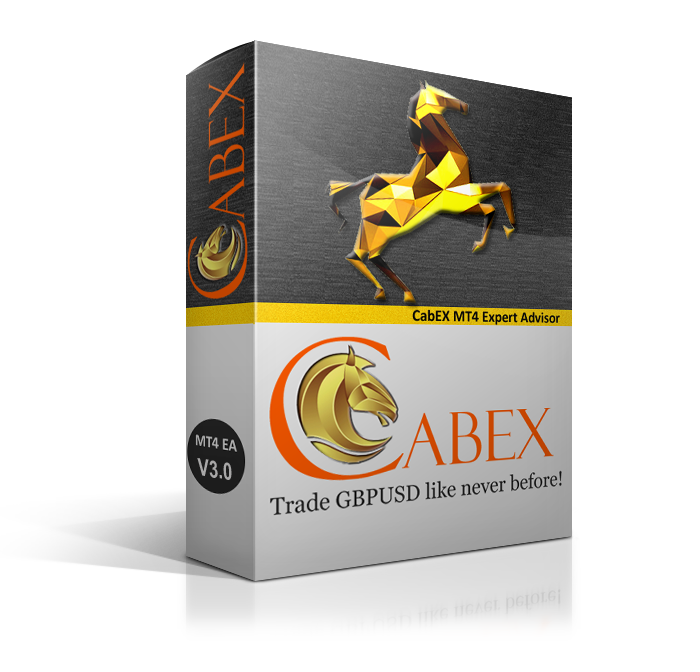 Since 2013, CabEX has proven to be a robust, safe and profitable strategy for trading GBPUSD. The EA is 100% automated giving your complete freedom, peace of mind and stress free trading experience. CabEX Version 4.0 brings about changes in strategy to improve performance and has been tested with the most comprehensive methods like simulated price action testing to predict the efficacy of the strategy and EA's functioning under various possible conditions that may be seen in future.

CabEX has gained about +6000 pips between 2013 to 2017. Potential to gain between 40% to 60% per year using recommended risk. CabEX specializes in trading GBPUSD pair which had very good trading price action.

Robust trading startegy does not require any parameter optimization or changes. Strategy has longer look back periods of between 3 weeks to 16 weeks and can identify flag, wedges and triangle patterns.

Server side Stoploss of 120 pips and Target Price of 500 pips are used, however trades are managed using an advanced trade management strategy.

High quality tickData strategy tests from 2007-2018 and simulated price action testing to predict the efficacy of the strategy and EA's functioning under various possible conditions that may be seen in future.

The GBPUSD currency pair involves chaotic price movements, very sharp and unexpected spikes. These are features that are very suitable to employ short term trading strategy that can be very rewarding. The UK economy is the second largest after Germany in the Euro zone. But the pound accounts for less than 15% of daily global trading volume due to which the liquidity on GBPUSD tends to be much lower when compared to EURUSD. This lack of liquidity fuels short term price spikes that makes technical levels fail. The price action involves false break outs, fund movement to clear out stops/pending orders prior to the real deal moves.

CabEX is designed to trade GBPUSD on the H1 time frame. The trading strategy is based on elimination of noise by considering only the H1 close for most part of the strategy. Hourly High/Low/Close values are considered for calculating the ranges and trade management. CabEX V2.0 adapts between managing trades based on H1 closing values and HLC values based on the strength of the current price action. This enables the EA to lock in gains while giving trades enough room to reach higher targets. Use of H1 closing values effectively filters away most part of the noise. The strategy is based on price action near moving averages - The EA identifies potential trends and reversals moves. Protective SL is placed on the server side at 120 pips and TP is set at 500 pips. These levels are very rarely allowed to be touched. The EA uses a hidden stoploss at 60 pips. Close below the hidden SL will close the trade. The hidden TP is at 300 pips. The EA has a very dynamic trailing SL system which moves the hidden SL to breakeven when the gain is above 50 pips. When the trade gains 100 pips, the hidden TSL is set to 50 pips. The levels are adjusted for every 50 pips. The EA attempts to give maximum space for the trade to work its way towards higher gains and attain a risk:reward of 1:1.5 - This is very important part of the strategy.

CabEX was updated to Version 4.0 in April 2018 - The new version not only brings about changes in strategy to improve performance but also sets new standards for our strategy development. We have also implemented the simulated price action testing to predict the efficacy of the strategy and EA's functioning under various possible conditions that may be seen in future.

CabEX V2.0/V3.7 had a look back of between 2 to 3 weeks. We had been trying to improve upon the strategy with the limited lookback period and making the EA adapt tp current price action faster. CabEX strategy is seen to be very robust, but the weakest part has always been its ability to deal with flag patterns (both long term and short term flags – of certain ranges) – Losses seen during short term flags are common but easily overcome when breakout/fall outs occur. The long term flag had given deep and long drawdowns in past but was accepted as part of the strategy since it was within the strategy range of 25%. Even though this level of drawdown is considered as part the strategy, in practical trading, drawdowns of 25% is seen to be very difficult to handle and continue trading. While Monte Carlo analysis gives enough confidence that the strategy will be able to survive with maximum losses of between 35% to 40%, these are of little use in real world trading.

Just before the V4 aupdate was applied, CabEX was near the Max historical drawdown of -1200 pips seen since 2007. The strategy loss is seen at -1000 pips with price action trapped inside the upward trending flag - The duration of the flag pattern is 14 months now almost reaching its historical max duration. Phibase team has been working towards making CabEX stronger and better - the most obvious weakness of the strategy was its inability to deal with the flag pattern.

We are happy to inform you that CabEX V4.0 eliminates the weakness which was present in the original strategy. There has not been any major changes in the strategy or trade management - trades are still based on price action near moving averages - trading potential trends and reversals moves. Major changes are listed below:

Phibase has set very stringent standards for strategy development by setting Max drawdown to less than -900 pips (< 20%). Simulated pricing tests has shown drawdowns in ceratyina conditions to reach about 1300 pips. 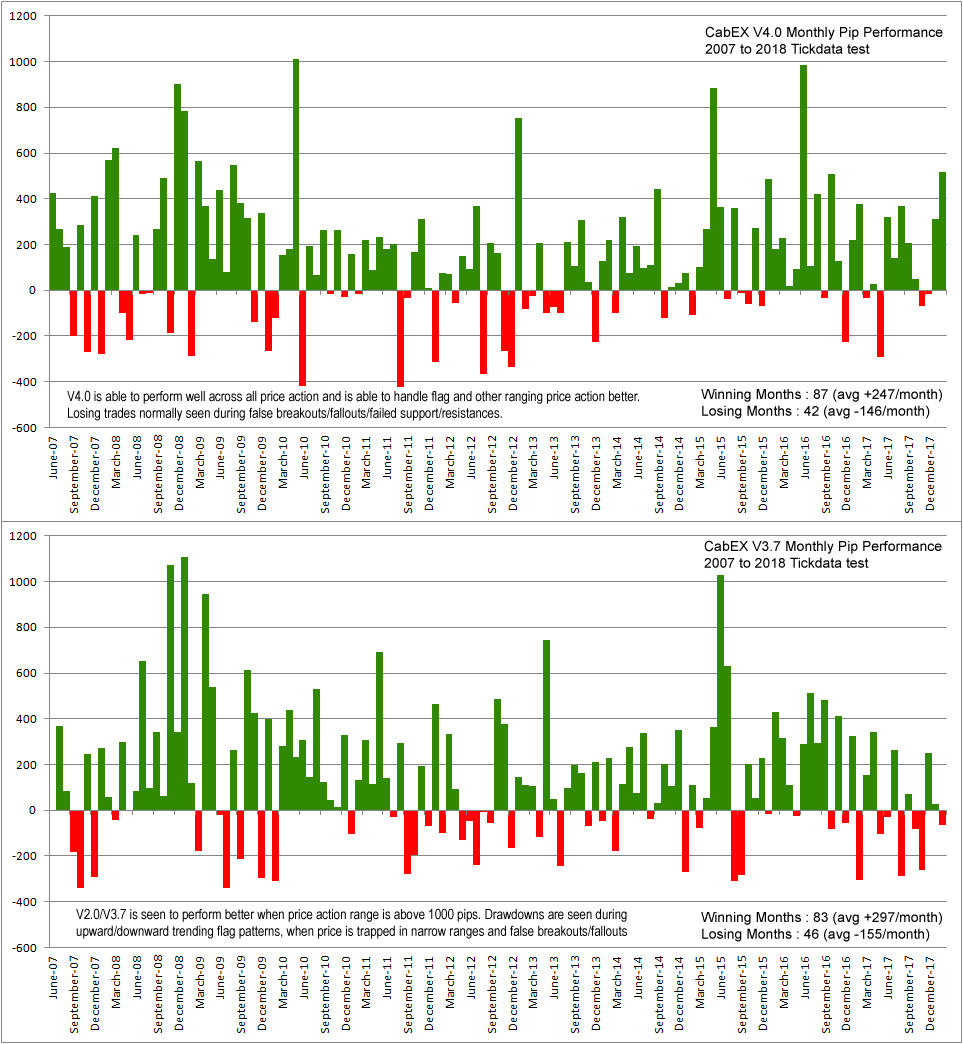 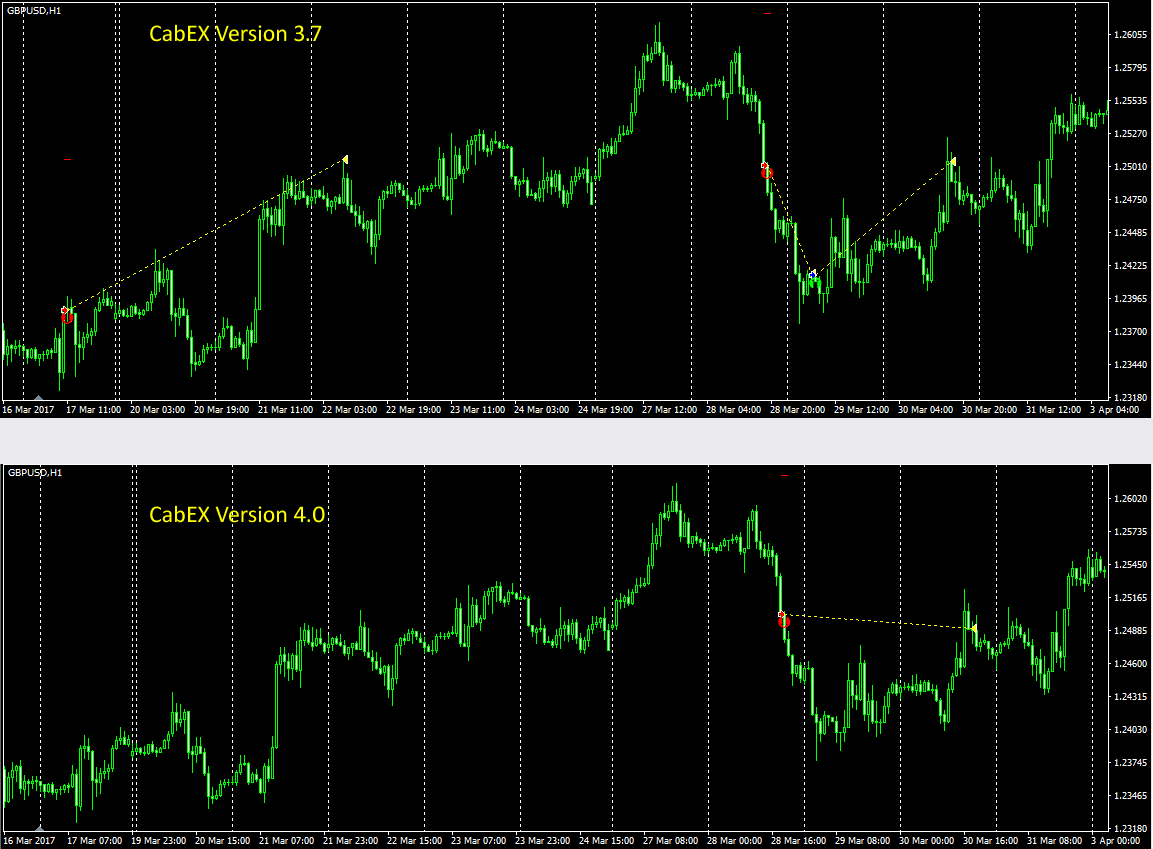 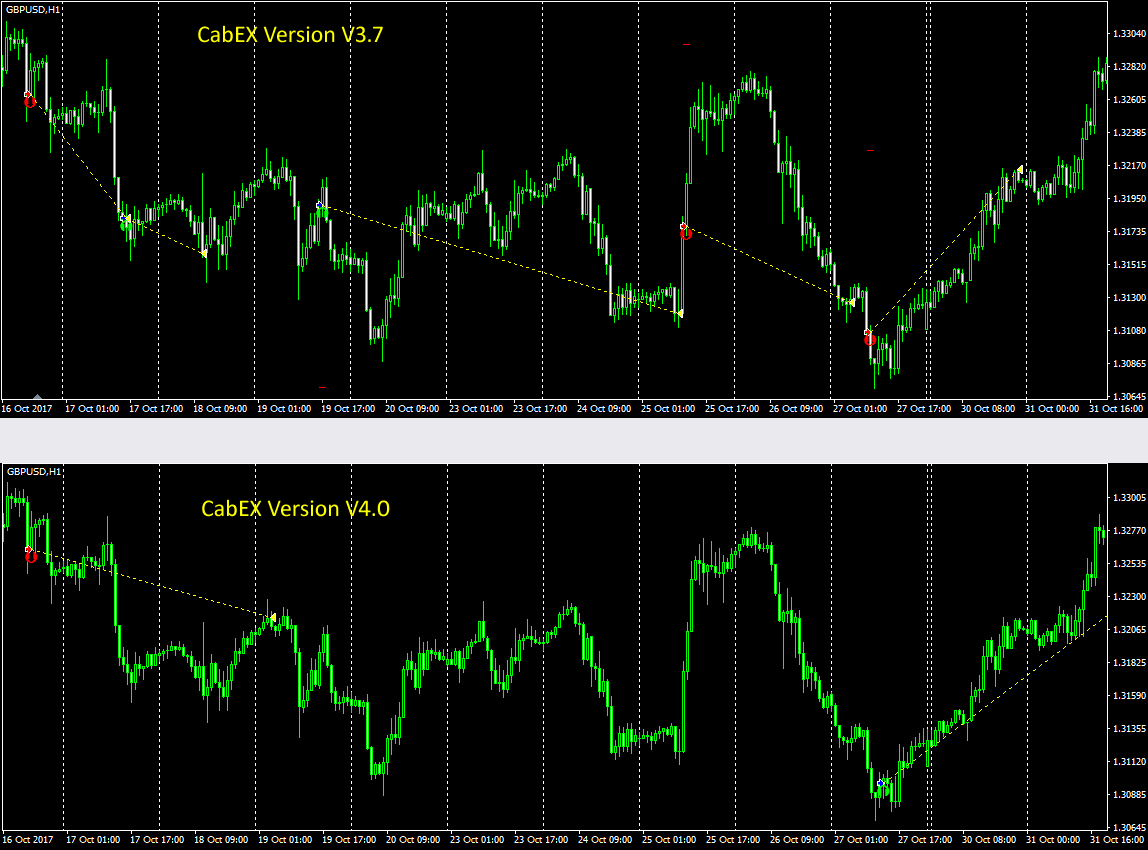 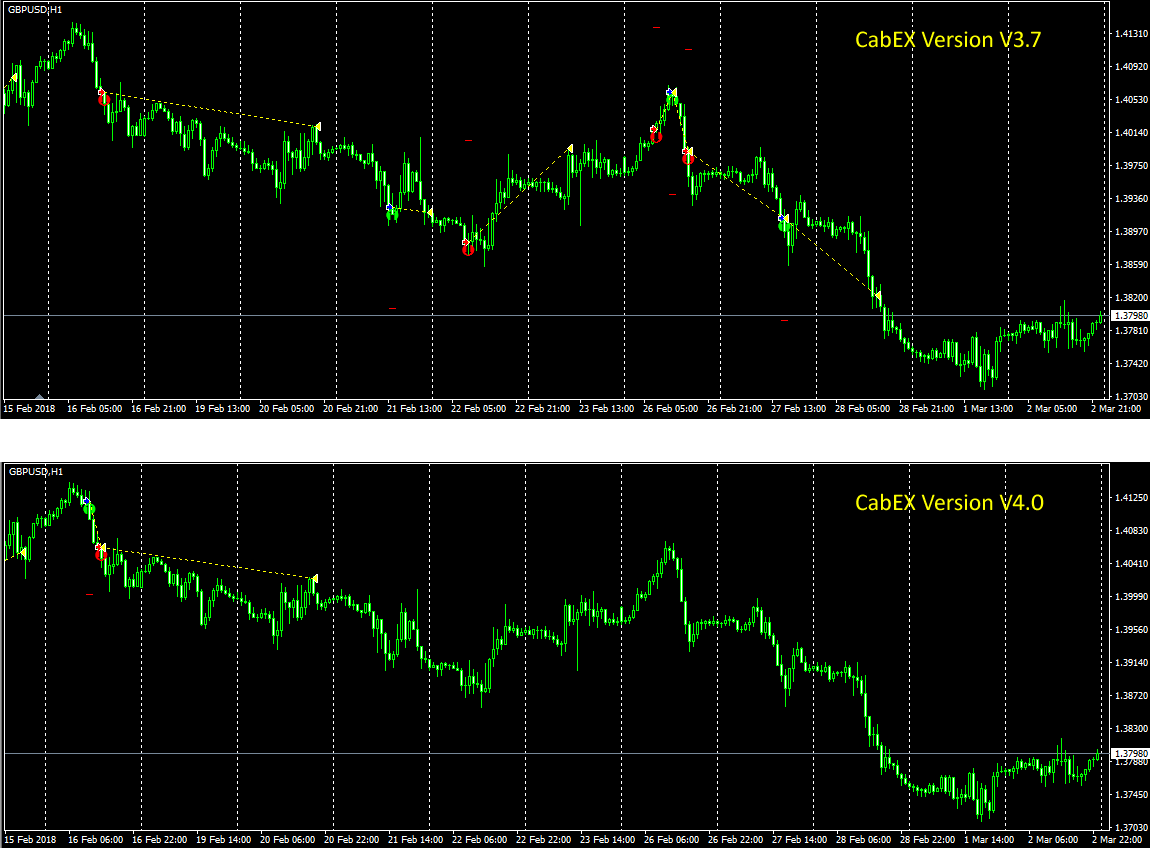 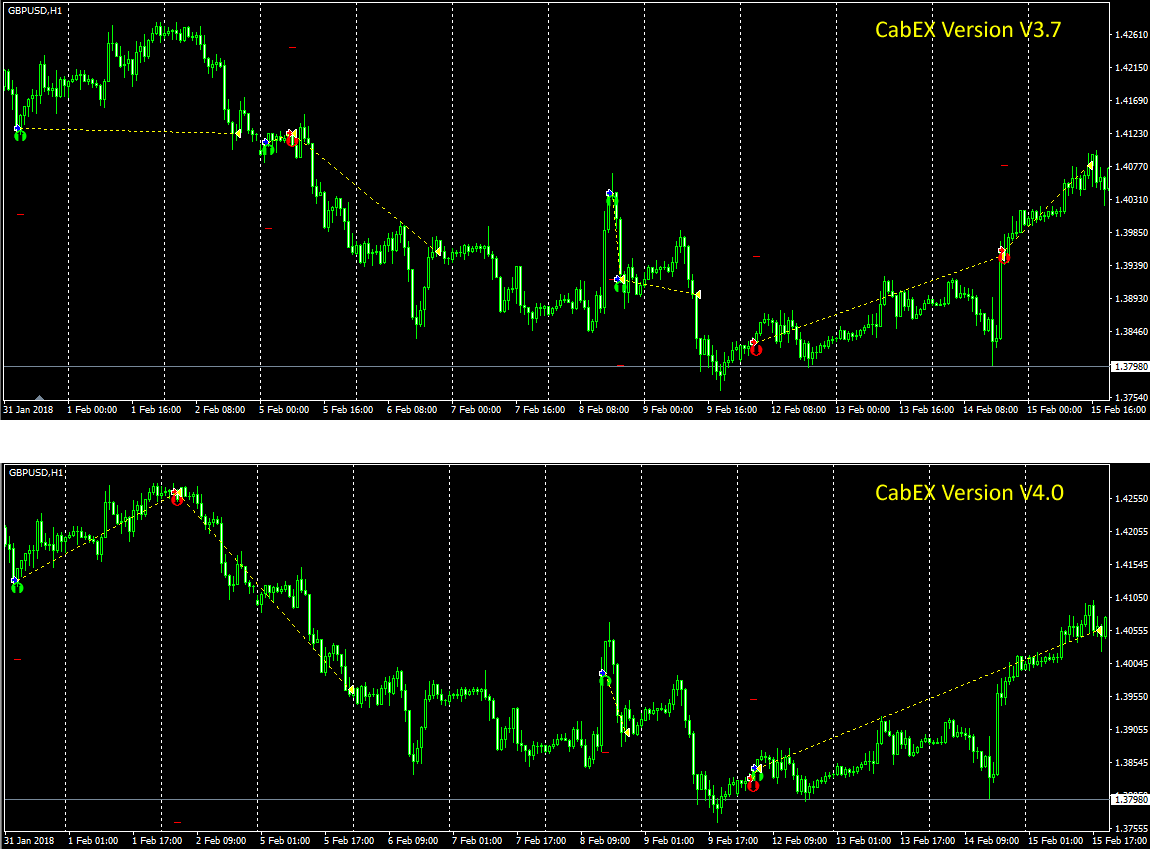 The traditional tickdata test has always been useful in setting the correct risk and gain expectancy of the strategy. Version 4.0 provides consistent gains across various price action with little or no dependence on price range. The strategy now has a max historical drawdown of just -836 pips. The EA makes 25% less trades, but gains more than any of the previous versions. The average gains are about 110 pips and average loss is about 66 pips with a success rate very close to 50%. 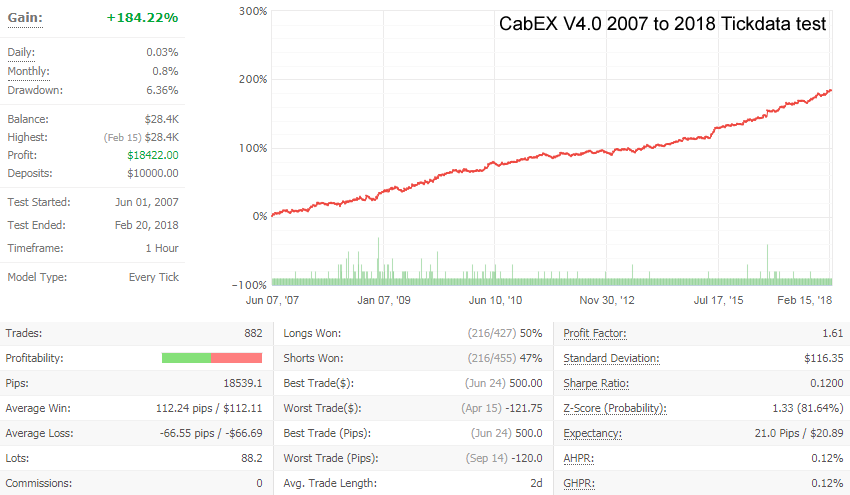 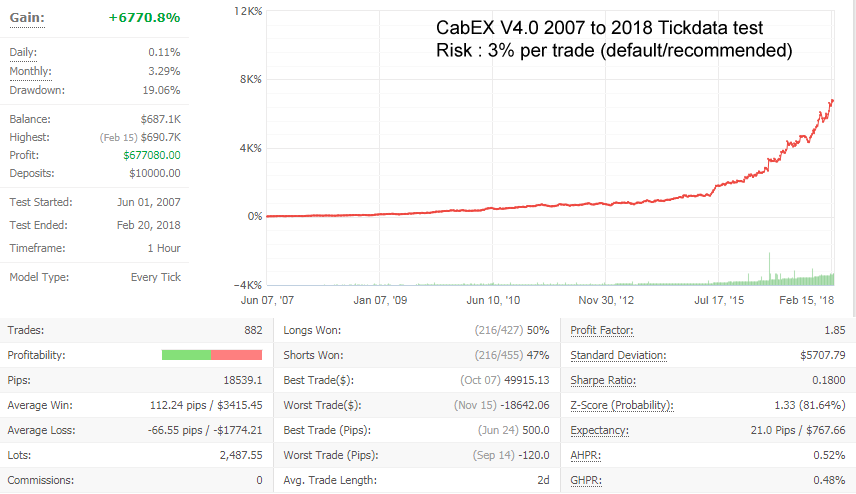